Posted by Kelly of The TV Mouse

“They always throw it on Valentine’s Day because Doctor Who fans are available.”

That’s what actor/ writer/ comedian Toby Hadoke said on Friday night to a packed room full of Whovians. Fair play, Toby. But if you’re not going to surround yourself with people who love something enough to fly across the country and talk about it, what exactly is the point of Valentine’s Day?

And it’s not just the fans who love talking about this show. I’m still not over the fact that Billie Piper, sick with the flu, got on a plane to Los Angeles anyway. Flawless queen. Our first major Gally event was our photo op with her, and as we took our places, she draped her arm around Gillian, who was standing where Billie was looking, and asked the staff about medicine–some beautiful sounding medicine that we don’t have in the States, which led to a conversation about what she needed and an extra long time in Queen Bil’s presence. (Gillian: “That flu is the best thing that ever happened to me.”) Then she apologized for keeping us. Billie, you can keep us forever. 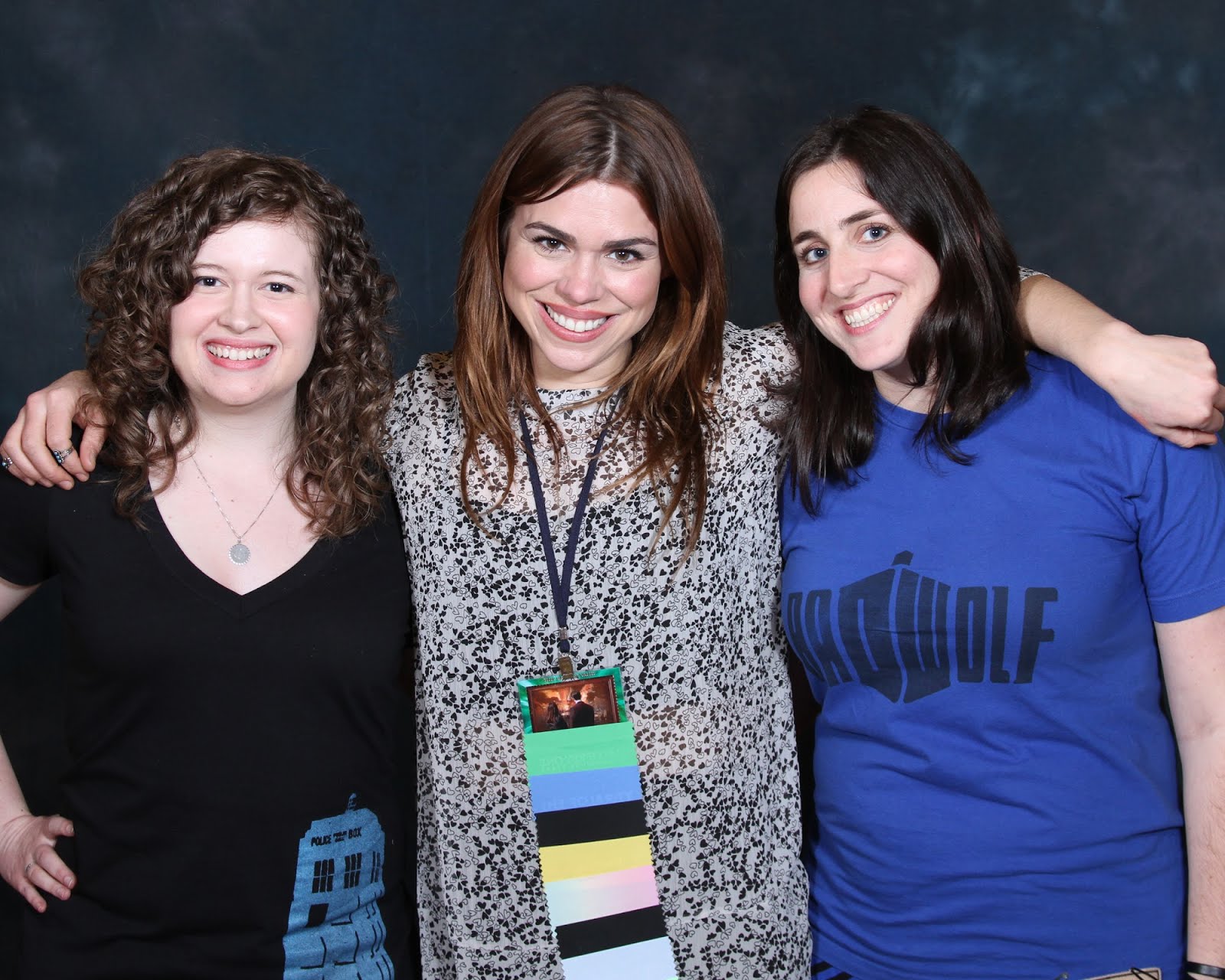 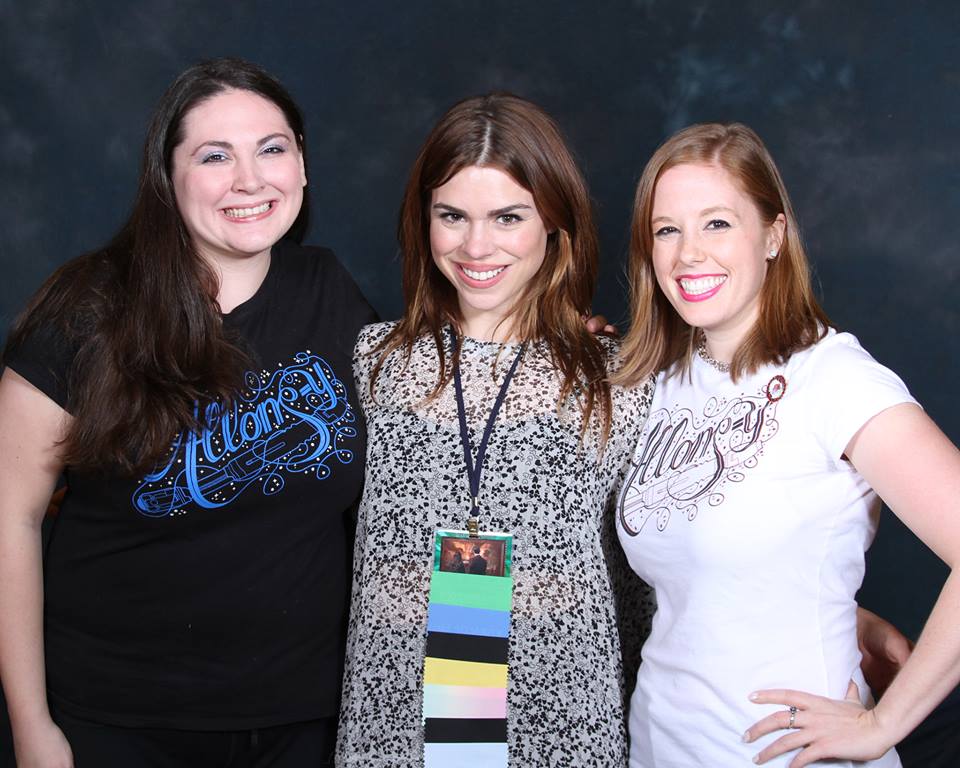 To be clear, this is how gorgeous Billie Piper looks with the flu. It would have been my honor to catch a cold from her, but my immune system had to pick this weekend to work perfectly.

Next up was the Big Finish panel, featuring Eighth Doctor/ professional life ruiner Paul McGann (or “Sexy Beast Paul McGann,” copyright Kim and Sage).  Last fall, the man stole our hearts in just six minutes with his 50th anniversary prequel, but being in a room with him takes it to another level entirely. This was such a world-shaping experience for us that we’ve decided to devote an entire post to him, which Sage will be bringing to you shortly. Just know that he ruins people’s lives.

The benefit of sitting in on Paul’s interview, aside from quite literally everything, was that it gave us great seats for the next event: the Companions’ Panel. Everyone at Gally who’s ever traveled with the Doctor was up there, from the adorable Deborah Watling—whose Victoria traveled with the Second Doctor, and whose every comment was just overflowing with gratitude for the show and its fans—to Arthur Darvill, who was wearing a t-shirt with a cat on the pocket. Arthur would later comment that he didn’t plan to pack so many cat t-shirts, but I’ve seen him sing “Everybody Wants to Be a Cat” with his girlfriend and I don’t believe him.

They seated the companions in order of their appearance on the show, meaning Arthur and Billie shared a couch and reacted to everything in tandem, like siblings. Billie Piper’s reaction faces are golden. When Frazer Hines said of Sixth Doctor Colin Baker that they’d “shared a woman,” her eyes grew so wide that I think she was trying to summon David Tennant into the room with her just to share the moment.

The cast of Classic Who was loose and fabulous all weekend. They sassed each other freely, but they were very serious in their appreciation of the show. Rose Tyler got a lot of love up there, obviously. My favorite comment came from Nicola Bryant, who played Peri in the 80s, who still looks exactly the same, whose Twitter bio is “Who girl—always, all ways,” and who needs to start some sort of charity where in exchange for a donation she comes to your house and tells you stories over a plate of pancakes. Nicola explained that after her requests to go over her character’s backstory were denied, she just wrote up a bio for herself, a whole history of everything that mattered to Peri. Even if no one else ever read it, she wanted to know that her character was someone. She said she felt like all of her homework had been read in Rose.

It hurts how proud I am.

We carried all of our Doctor Who emotions to a panel by Graeme Burke and Robert Smith?, authors of Who’s 50—The 50 Doctor Who Stories to Watch Before You Die. Kim already befriended them at L.I. Who last year (check out her write-up), and I can now echo her recommendation. Buy this book if you enjoy the show, if you think you might want to start the show, if you’d like to be better versed in the classic series, if you enjoy crying in public places, and/or if you like arguments. No two people can have the same list, and part of the fun of the book is in reading the authors’ dueling opinions and considering what your own list would look like. Mine would be heavier on Tennant, as would my life.

Fortunately, the hotel lobby made up for what my life has otherwise lacked, aka people dressed up as the Tenth Doctor. All weekend, there were pinstripe suits and long coats. Friday night, we found Ten in his tux and black converse sneakers. Because it was after 6, and he’s not a farmer. (And also because it was Casino Night.)

After mingling, we popped in on Toby Hadoke’s show, “My Stepson Stole My Sonic Screwdriver,” which turned out to be a celebration of the way TV shows in general, and the Doctor in particular, can bring people together. Then we decided against the casino room, because who wants card games when there are Rent songs to be sung at karaoke opposite Mickey Smith and Captain Jack? Priorities.

Read the Rest Over at The TV Mouse…