It’s that most precious time of year again: The Annual Eurovision Song Competition!

For those of you who aren’t familiar with this magical fairytale land of dramatic pop ballads, colorful costumes, mediocre club tracks and all of the wind machines, Eurovision brings members of the European Broadcasting Union together in the spirit of peace and harmony (no, really) to find the best song Europe* can offer.

*Plus some other countries that are either members of the EBU such as Israel, or Australia because Commonwealth reasons and why not?

Eurovision is broadcast across Europe and around the world, most recently picked up last year by Logo TV in America. Each participating country has its own internal selection process to nominate a song. Contestants must sing original songs LIVE (though Norway controversially challenged that rule this year to allow looping), and are split into 2 semi finals, where the top ten from each session go on to the big Final show. Joining those 20 countries are the BIG FIVE: The U.K., Germany, Italy, Spain and France. The Big Five get automatic bids to the final because they put up most of the money for The EBU and Eurovision. Not even kidding. Also automatically through to the Final is the host country.

What do you win?

NOTHING. That’s right – these talented folks are in it purely for pride, and the right of their country to host the competition the next year.

How do you win?

By voting and a jury panel. Points are awarded by a jury, and added to app & text votes from participating countries. The top vote getter from a country gets Twelve Points (Douze Points).

The 2nd place vote gets ten, then eight, etc. Each country awards their point spread in a long drawn out ceremony where each country’s representative tries to make the most of their 30 seconds on TV across Europe. The audience follows the scores on a Big Board. It’s truly a sight to behold. 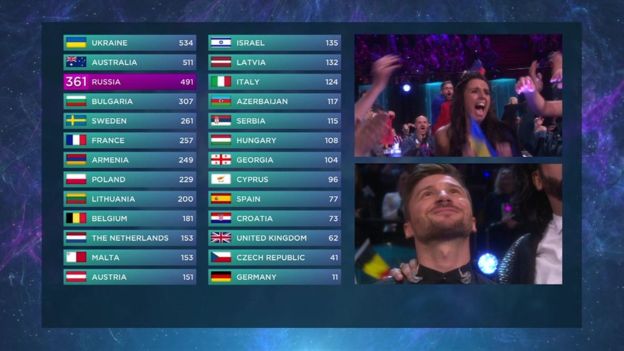 Finally, the jury totals are added and then we have a winner!

Here’s the catch though: You cannot vote for your own country!

It’s glorious. Will the Baltics stick together? Will anyone vote for the UK because of Brexit? Will an amazing song get tanked because nobody likes their country? Will Greece & Cyprus vote for each other again? All possible.

What kind of song usually wins? It depends. This changes year to year based on trends, but the kind folks in Stockholm last year gave us a great tutorial on the perfect Eurovision song!

Okay, kids. This year’s competition is being held in Kyiv, Ukraine because last year Jamala won with her song 1944, a not too thinly veiled dig at Russia for their invasion of Crimea. (I told you there was politics.)

So in order to retaliate, Russia nominated Julia Samoylova and her song “Flame is Burning.” Julia, who has spinal muscular atrophy and uses a wheelchair, was a contestant on X Factor Russia. Julia has spoken out in support of Russia’s actions and has performed in Crimea, which is a big no-no in Ukraine. In fact, it’s illegal to visit Ukraine if you’ve entered Crimea from Russia.

The upshot? She’s banned and no Russia this year, which is kind of a bummer since this is the same country that won in 2008 with THE Evgeni Plushenko skating on stage to Bilan’s Believe.

Where does that leave us?

This year’s favorite is currently Italy with the song “Occidentali’s Karma” by Francesco Gabbani. It’s just the perfect catchy pop tune, hitting all the right notes and goofy Eurovision buttons. One  needs to watch the video to appreciate it in all its glory. The lyric “the naked ape is dancing” should clue you in right away.

Other top contestants this year are Portugal with a violin & piano infused ballad, and perennial contender Sweden’s I Can’t Go Onwhich is a fabulous example of the Eurovision genre of Men in Suits TM.

Rounding out the rest of the favorites are Bulgaria’s A Beautiful Mess (which I adore) and Armenia’s Fly With Me. I personally love Austria’s Running on Air by Nathan Trent. Adorable boy singing amongst snow-capped mountains? What’s not to love? (Just ask Harry Styles.)

There are always those entries which you say Only In Eurovision. This year’s crown on that front goes to Yodel It from Romania. I’m not sure you knew you wanted a mid tempo pop hit with yodeling but here it is right there for your listening pleasure! In the “Seems Harmless But Oh Hell No” category is Meontenegro’s entry. The song seems like an average club track, but then you watch the video and THAT HAIR AND THE DOCTOR WHO QUARRY MESS WHAT IS HAPPENING?!

Croatia is bringing their all here with My Friend by Jacques Houdeck. It’s something, alright. Take a dash of cheesy R&B, add in Opera FROM THE SAME GUY mixed together in layers and throw in a totally predictable Dramatic Bridge Key Change and you have all the ingredients for a so bad it’s great Eurovision song!

You can watch all of the contestant entries on Eurovision’s Official YouTube channel.

The broadcast schedule is as follows, but check your local listings for exact times in your country! The US Broadcast will again be on Logo TV, hosted by Drag Race judges Michelle Visage and Ross Matthews. They should be chock full of the snarky tradition Eurovision has had in the UK, hosted for a long time by Terry Wogan, but now by Graham Norton.

Find out more about each contestant on the Eurovision website, grab your popcorn, your snappy judgement and enjoy! I’ll be back at the end of the whole competition to recap it!