If you follow our red carpet posts, you know that I’m easily bored by men’s fashion. Not a lot of interesting choices or risks taken, although we did have an improved crop of male attendees this year. It’s entirely possible for men to have just as much fun with fashion and use it to express themselves if only they were willing to try. You know how I know? Well, ladies and gents,

Harry Styles is back.

That’s right, the past Most Handsome Young Man winner and HOF fave has released his first solo album and spent the past two months promoting the hell out of it. Custom Gucci suits with a dragon design on the pants are the new floral Gucci suit: When referring to Harry’s wardrobe, you have to specify which ones you mean.

Solo Harry is still the same style icon we know and love, but his aesthetic has evolved and I, for one, am here for it. I couldn’t bear to rank looks or cut things out, so I tried to include everything chronologically. Get ready, we’re about to go on a journey.

First up, Harry’s interview with bestie Nick Grimshaw on the BBC Radio 1 Breakfast Show, which aired when his single, Sign of the Times, was released. This was the only photo we got at first and it looks like classic Harry: black blouse, half undone (although no long locks).

Then we get a glimpse of the pants. Wait, where are the trademark black skinny jeans?

I don’t know, because he chose Gucci plaid trousers, a sign of the sartorial times.

Although he did pop on Columbia Records’ instagram in a classic Harry ensemble that day.

Next up, New York for Saturday Night Live. I think the sweater tied around shoulders look is a little controversial, but my hometown was very preppy so I’m fine with it.

Then we get promo for his SNL episode and it’s a lot.

That may look like a simple white blouse with black suit but, because he’s Harry, he snuck in a pink scarf:

But if you thought that promo was a lot (which I did, thank you very much), you haven’t seen anything yet:

I will never be over this pussy bow, I swear to god. He looks magnificent.

I know, we haven’t even gotten to the show yet, but how could I not include this photo with Leslie Jones, a hint of pink, and the designer sunnies that most make him look like an alien visitor trying to learn our ways?

God, he’s just so happy to be there in his Hawaiian print Dad blouse (later paired with a pink Gucci sweatshirt!).

This Gucci suit is a little different from what we’ve seen from Harry before, mainly the cut of the jacket, yes?

Which came off for the Ever Since New York performance. Harry Styles soulfully strumming an enormous guitar, aka everything I never knew I needed.

Harry was spotted around town after SNL and it’s a tossup as to my favorite accessory: the sunnies, the rainbow pin, the pink phone.

He stopped for some fan photos on his way out of town and, it’s official, I really am quite fine with the sweater tied over shoulders look.

Next up, Harry’s appearance on The Graham Norton Show and the debut of custom Gucci dragon pants. I appreciate the way the red pops…

…as well as the detail on the jacket, but I’m not really into the shiny material.

Although, of course, he’s still pulling it off.

It is a crime how few good photos there are of his appearance on the French TV show Quotidien. Have you ever seen an outfit that demands to be documented like this plaid vest paired with matching pants and black tee does?

And again, the face of a man who knows he is pulling it off.

If you missed Harry’s issue of Rolling Stone, you can catch Sage’s breakdown here.

Another dark pink blouse with a bow, this time vintage Alexander McQueen. Also you can get a better look at the Gucci rainbow loafers he’s been pairing with everything. Side note, everyone in his band has a pair and that just of kind does something to my heart?

A prince in Gucci.

Why settle for one photo of Harry Styles in a designer white blouse when you can have two?

Back to Harry Classic for an iHeartRadio appearance.

The Burberry sweater he wore in the Sign of the Times video is beautiful but the real story is that $3,000 Gucci overcoat…

…which they cut a hole in the back of to accommodate the harness, just for the record. Can you imagine?

Have you ever seen a cropped fisherman’s sweater because here’s one at The Today Show soundcheck.

I mean, I love it but, seriously, how else would you describe this? (My husband, Colin: “Yeah, he definitely looks like he’s out to harbor.”)

Once this almost rockabilly look hit the internet, I kept seeing it described as millennial pink. I’m right at the cut off, and by some standards not considered a mil, so I had to Google the phrase, fully expecting to be annoyed by the explanation but ultimately finding myself pleasantly on board.

I adore this pocket detail, so I needed you to see it.

Here’s where it hit me that he’s a little bit swimming in fabric, especially for a custom design. And once you see it, you keep noticing it in looks to come. I’m very into this aesthetic but the fit appearing to be off does bother me, especially since we’re used to seeing him in very form-fitting clothes.

This might be my fave of the three, in part because I really like the matching detail on the jacket.

I love this pink plaid Vivienne Westwood from his second Breakfast Show appearance but do you see what I mean about the fit?

There aren’t many photos from this interview with RTL but you had to see this gorgeous red floral blouse. (Also, peak short hairstyle, am I right?)

That’s a cute jacket he wore for The One Show soundcheck, right? Wait for it…

…there it is. And that’s custom, bitches.

On his way to perform. The side detail reminds me of marching band uniforms but in a way that I’m not mad about it.

And apparently he coordinated with the green room decor.

Return of the pink Gucci sweatshirt when he arrived at The Garage for his surprise show!

And again I’m whelmed by the fabric.

The debate over suit vs jumpsuit got a little heated in my friend group but I don’t even caaare, he looks amazing.

I hope you’re as into Harry in these Charles Jeffrey looks as the Sunday Times and I are because those pants are about to make a reappearance.

There were a lot looks in the Behind the Album documentary but, quite frankly, this is the only one that matters. I am obsessed with it.

Harry started his week-long residency at The Late Late Show in this custom Gucci print and, honestly, this might be one of my favorites from the whole time period we’re covering here.

I don’t know who decided to indulge Harry and his love of bad puns by letting him do the monologue the next night, but I assume they regretted it immediately.

Then we got a burgundy Calvin Klein suit for the Carolina performance, which I wish I had more photos of because I think I’m really into it.

I will never tire of Harry in a romantic white blouse and this look was perfect for his Two Ghosts performance.

I love this look for Carpool Karaoke and you have to watch for the bit where James points out that Harry can pull off any look.

That, my friends, is confirmed jumpsuit for his Kiwi performance.

Your fave could never.

But seriously, the way he vamped and worked it must be seen to be believed.

And what better way to wrap up his residency than with a Britney tee?

What’s next for Harry? 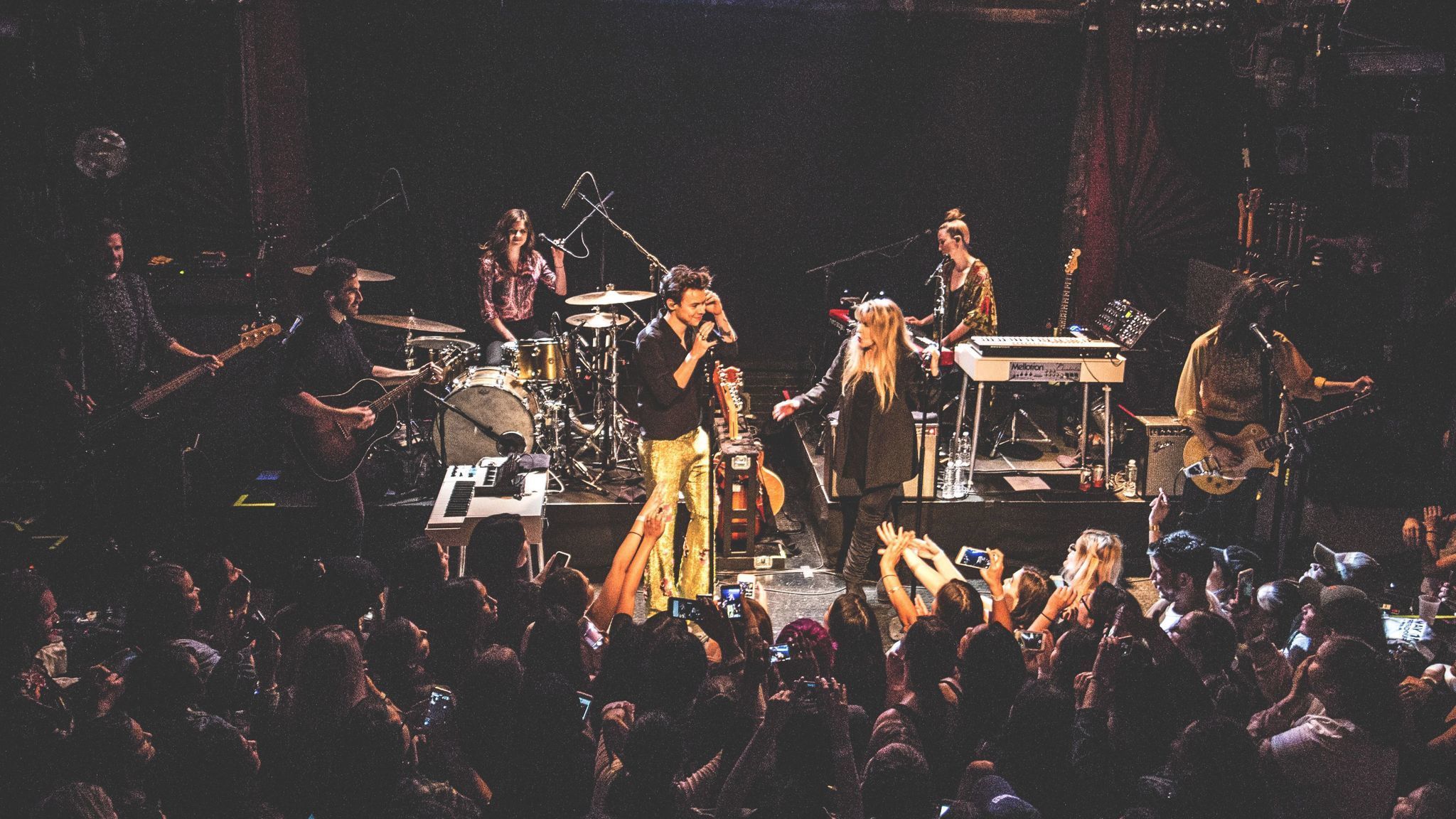 Oh, right, a surprise show at The Troubadour where he was joined on stage by Stevie Nicks.

AND HE WAS WEARING SPARKLY GOLD PANTS WITH A FLOWER DESIGN.

Harry decided to scale back and perform a few songs acoustically for his next surprise show, which was scheduled right after the terrorist attack in Manchester. He spoke to the audience from his heart, saying “We have a choice every single day when we wake up of what you can put in the world and I ask you be please choose love every single day” before having a moment of silence for the families affected.

By now I think we’ve all seen this heartwarming gif from the One Love Manchester concert, but I think it’s worth seeing again.

Harry was spotted out next in another trademark Dad blouse, this time paired with a Paul McCartney tee.

And then in a “Women are smarter” tee AND EYEGLASSES. ON HIS FACE. NOT AS A HEADBAND. AS YOU CAN SEE (PUN INTENDED) THIS IS NOT A DRILL.

Harry returned to The Late Late Show when they broadcasted from London and this blue suit is creeping toward the top of my life (okay, I meant to type “list” but I’m just going to leave it).

The perfect choice for performing from the rooftop, I must say.

How adorable is this??

Wait a second, is that…

What a way to wrap up album promo, am I right? Does it get any better than a flamingo jumper???

Until then, talk to me in the comments about your fave looks, what you think of the fit, and Gucci dragons.